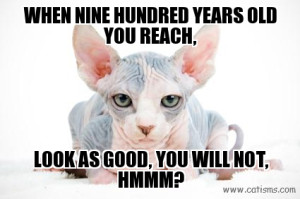 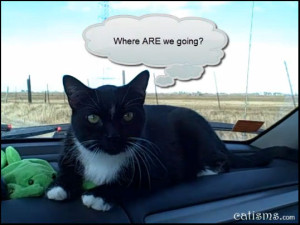 Traveling with cats can be a lot of fun, if you have the right cat.  At the end of 2008, I packed up my best friend (Scooter, my cat) and the rest of my belongings to move to my new home in San Diego.  When I told people that I intended to travel with my cat, they questioned my sanity and everyone suggested medication to subdue him in the car.  I knew that all he needed was sight of me, his furry mouse, his food and his box.

Scooter was a real trooper on that adventure.  At the beginning of each day, there was a lot of dialoguing between us in the car.  After 20 minutes or so, he would settle in to sleep on my lap while we drove along our way.  Each evening, I’d set up his box and food in the motel and bring him into the room.  After investigating every nook and cranny of our temporary abode, he would find a spot on one of the beds and just relax with me.

While the myth dictates that cats are creatures of routine, Scooter just went with the flow of this life upheaval.  He was an AWESOME travel buddy, although there was the occasional battle of wills when he got restless and tried to wander into an area of the car that put us both at risk.  All things being equal, I’m glad he wasn’t crated during this trek.  It would have been much harder to calm him down, even if there was a perception of greater safety.

This video was shot on the second to the last full day of travel.  We were on our way to pick up a friend at the airport and drive south from Sacramento to San Diego along the coastal route.